There are almost three thousand municipalities in Slovakia. Many of them only have a few hundred inhabitants. They are often unable to provide their citizens with adequate services and, in addition, the cost of their administration represents a big burden for the state budget. The analysis “Hidden Treasure in Self-government” by the Institute of Financial Policy has already pointed out the potential for the increasing of efficiency.

Norway is a country that can today afford to finance cities and villages significantly more than Slovakia. Despite that, few years ago they decided on a reform, results of which are already beginning to show. We looked at Ullensvang, Norwegian municipality, how it gets the money back because of the rational organizational change – along with better services and higher quality of life in the regions.

One mayor is more than three mayors. At least that is the experience of the Norwegian municipality of Ullensvang. Less than a year after merging three smaller municipalities into one larger one, the inhabitants can already see the first results.

“We plan to see economic benefit from merging in the range of 10 million euros, just from reducing the costs for administration and services,” explains Ole Jørgen Jondahl, the chief municipality officer of Ullensvang. “But those are not the only advantages,” he adds.

Ullensvang is one of the youngest – and largest – Norwegian municipalities. In the area one and half times larger than Bratislavsky kraj lives number of inhabitants comparable with Velky Krtis or Myjava. The mountainous region in the western part of the country, near Bergen, is bordering the famous Hardangerfjorden in the west; most of its 11,000 inhabitants live on the shore of the picturesquely narrow Sørfjorden. Last year it didn’t exist in the present form yet. The new municipality was created by merging three smaller municipalities of Jondal, Odda and Ullensvang. 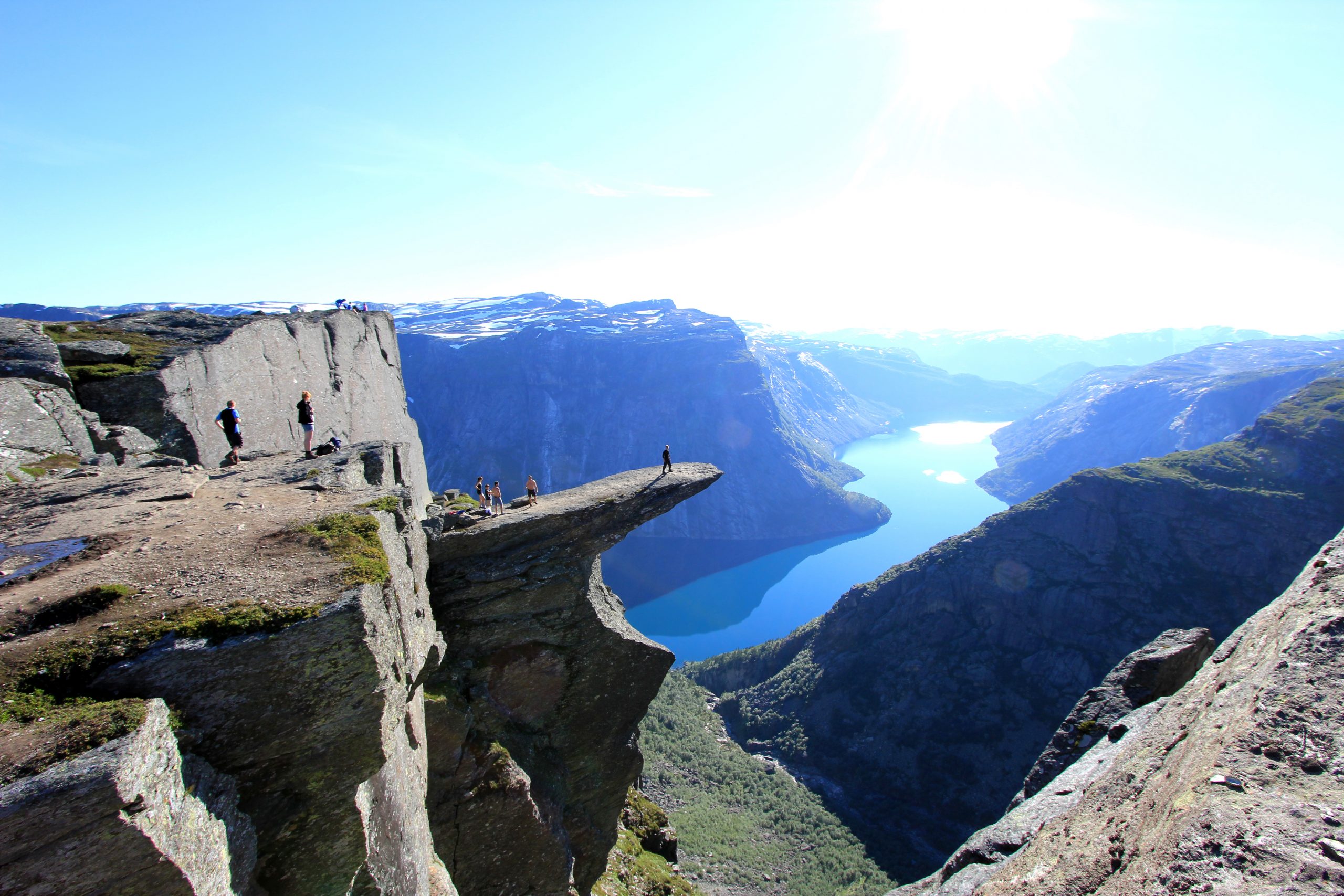 Trolltunga is a sought-after tourist spot in the Ullensvang municipality

Professionality of municipality as a goal

Another benefit of merging is creating more distance between the decision makers and those who are impacted by the decisions. “The processes are then based more on data than on feelings and this again contributes to greater professionalism,” says the Ullensvang’s CMO. “It also increases the ability to treat everyone equally.”

Of course, just by merging some basic functions the new administrative body saves money. Before, the same area and inhabitants were served by three mayors, now there is only one. The number of other executives and deputies decreased as well. On one hand, this cuts the costs, on the other hand it increases the ability to act quickly. “To sum it up, the goal is to do more for less money in the future; more tasks, less costs,” explains Jondahl.

Income from the hydro power plant is a significant source of financing for the municipality. Pictured is the hydropower plant Tysso I, built in 1906-1918 with an aim to provide power for industrial factories in the Odda commune.

Reform in the making

Norway started the large municipal reform several years ago inspired by a similar redesign in Denmark in 2007. The government in Copenhagen managed to reduce the number of municipalities from 270 to 98 at the time and many of those became an inspiration for the whole world thanks to their innovative and sustainable approaches. The first wave of merging is already finished in Norway too – it left the country with 11 counties instead of former 19 and 356 municipalities replacing the former 428.

While deemed success, the reform did not go as easy as it seems. “The principal decision was whether this process should have been voluntary or driven by the government,” explains Jondahl. The government in Oslo decided not to push the changes and left the final decision on the municipalities. However, it promised many incentives to the municipalities that decide to merge, including financial grants.

Timeline of the merging process of the three municipalities into one.

Municipalities have many competences in Norway’s administrative system. While officially they are one level below the counties, when it comes to responsibilities, they are almost equal. Municipalities have to take care of the health and elderly care, they run the primary and secondary schools and kindergartens, manage water works and renovations. They are responsible for local roads too – and when central government decides to build or repair roads, the processes are managed by the municipality. The mayors can count on the money from taxes, fees and grants – which is the biggest source of income. Property taxes from local businesses and energy companies are also an important income source to Ullenavang.

The idea behind the administrative reform was to create robust municipalities with minimum of 10,000 inhabitants, able to have sufficient capacities and competence to manage all the tasks on the level comparable to the rest of the country. Of course, to totally change the administrative division of the country is quite complicated when it is not enforced. However, it appears to be a good first step for understanding of the reform, which had to be done by the state to increase the efficiency of governance.

“This decision to leave it on municipalities alone for sure has its positives, but it has drawbacks too,” comments Jondahl. While some municipalities feared they will lose their influence or identity, some rich and small ones decided they could well buy the needed services from larger neighbors without merging, and in this way keep their independence. Even in Ullensvang the process was not straightforward – almost half of the people in Jondal, who are divided from the other concerned municipalities by a mountain range and a fjord, opposed joining the merging. Yet after long democratic processes the local politicians managed to persuade their inhabitants of the advantages.

For example, before the merging, in small Jondal there was only one person responsible for every area. In his or her absence, all processes came to halt. In addition, the civil servant was on his or her own. “We certainly noticed we are now more capable. Larger teams mean more competence, plus another benefit is the ability to discuss, consult and find solutions fast within the team,” says the Chief Municipality Officer.

In addition to administrative shuffling, Ullensvang is trying to change the whole culture. They are hoping to create an atmosphere of creativity and responsibility, in which the leaders are willing to take risks, fail and learn, are curious, yet stand firm. Employees should be willing to try new things and adopt new ways to do the daily work.

“And while the larger municipality has existed for less than a year, we already have positive feedback from people, who see that certain processes are now faster and more efficient. And of course, the main backers of the change are now the employees of the municipality, who saw that their work became easier” says Jondahl.

There are plans to improve the efficiency even more. Like countries and regions at home and abroad, Ullensvang is looking at the smart cities concept. “We are already focusing on digitization of the administration in general,” sketches Jondahl the plans. The municipality focuses on parents, administrative tasks, health and elderly care, education, and environment, where it already had drawn strategies for digitization.

Yet the CMO admits, even the larger municipality is still too small to get the most from the concept. “While digitization and looking for new ways how to do things is absolutely necessary for reducing costs, we are still only scratching the surface,” he says. “We are still too small to efficiently handle the tasks,” he adds. Ullensvang is thus closely cooperating with the nearby city of Bergen, which has almost 300,000 inhabitants, and is the second-largest city in Norway. Bergen has several smart city projects running and it makes sense for Ullensvang to coordinate some of them.

At the Smart City Projects Ullensvang closely cooperates with Bergen, which is with 300,000 inhabitants the second largest city of Norway.